Sony’s latest OLED TV is one of the best of 2017,  but there are some things to consider before buying.

Contrast and Lighting –  This OLED TV is capable of producing brilliant blacks and the panel technology is excellent for taking advantage of dark environments, The Sony KD-65A1’s OLED panel is stunning when it comes to movies, regardless of the input medium.

Verdict – The KD-65A1 is a work-horse and has extraordinary video capabilities, no matter what media you throw at it. HDR-10 as well as Dolby Vision makes this panel future-ready and does an excellent job of giving you good sound. The maximum brightness is one weak spot, but the viewing angle is good.  It would be hard not to recommend this TV for both HDR and SDR viewing. Buyers just have to be prepared to deal with its odd angular stand and lacklustre remote. Read the Entire Review Here…

More OLED Tid Bits From Around the Web

CES 2018: what to expect from the year’s biggest tech show

Get the best pricing and Professional installation from Digitalliving.com

How to Get the Best 4K Video Experience With the Amazon Fire TV 4K and LG B6 OLED 4K HDR Smart TV Using HDR10 But No Dolby Visionhttps://t.co/5gg8S8bom3@amazonfiretv @LGUS pic.twitter.com/GNcdgozkcI 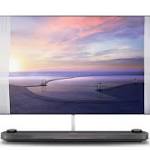